We are in the middle of one of the greatest sporting events on earth, the 2014 FIFA World Cup. Like many kids, I wanted to be professional footballer (as in, soccer) when I grew up – unfortunately, the real world indicated otherwise. Still, the tournament has allowed me to extrapolate a few lessons that can perhaps be useful for personal finance and life in general:

Two early departures from the tournament have been teams from Spain and England, where the two richest football leagues in the world preside. There are probably several reasons why neither team really performed well at the tournament. But, importantly, just because they both possessed incredibly well-paid athletes, people shouldn’t assume that there was a divine right for success.

In life (and finance), simply throwing lots of money at a problem is no guarantee that you’ll be any better off than 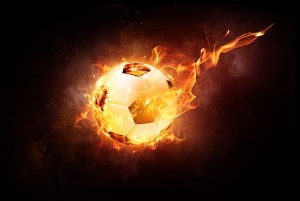 taking a more systematic approach to the situation.

Costa Rica, Algeria and Iran don’t possess any global footballing superstars. You could even question their individual skills and abilities. What they do have, however, is

What they do have, however, is good organisation. And this has likely been the reason for their success in the tournament (so far at least). Having watched them play, the players clearly have been given well-defined plans and they have been sticking to them.

So, even if you feel that you don’t think you have the knowledge to get ahead, or are scared to act because of movements in the stock markets, make sure you devise and commit to a robust plan that works for you. That should help mitigate the risks that you see and any limitations you feel you have.

If the system’s not working, change it

Belgium has two wins from its first two games, both of which have been the direct result of tactical substitutions made be the team manager in the second half of the games. In both cases, things just hadn’t been working out for the team until the decisive changes were made.

Ultimately, you don’t have to just accept the current state of things when you’re thinking about your financial picture. If things aren’t working, see what you can do to improve the situation. Sometimes it just starts with an awareness that something needs to change and a decision to do something about it.

We’re only about 12 days into the tournament so it’s still too early to say just who will take home the trophy. But while we’ve seen some great early performances by the likes of France and the Netherlands, both of whom racked up big wins, at the end of the day it’s about who is able to hold their nerve and show consistency over the course of the competition.

A 5-0 victory would mean nothing if in the knockout round you then lose. A 1-0 win is far less spectacular, but if that’s the score in your favour in every single game, then you will become world champions!

So, just because you’ve had a good day at the office (or bad day, for that matter), being consistent with your performance over time is what counts.

Armchair critics have the benefit of 20/20 vision

The charm of watching a match and providing insights after the event is that you can be always right. You’re safe in the opinion that you’re not the one heading past the goalpost, being beaten by the winger, or miskicking the clearance from a corner.
What “should have” been done is invariably something that we all know after everything has happened. Unfortunately, that doesn’t change the outcome and, quite frankly, stuff happens.

None of us is perfect and we’ll all make mistakes, whether that’s you needlessly signing up for a personal loan at an extortionate interest rate or you making a bad investment. The important thing is to be aware of where you fell short and to learn from it.

Send us a message