In case it escaped your attention a pretty big boxing match took place over the weekend between two of the greatest fighters of our generation.  The fight was definitely one for the purists. Floyd “Money” Mayweather beat Manny Pacquiao (unofficially “the people’s champion”) over twelve underwhelming rounds to become undisputed welterweight champion of the world.  It was a fight six years in the making and short in the memory. 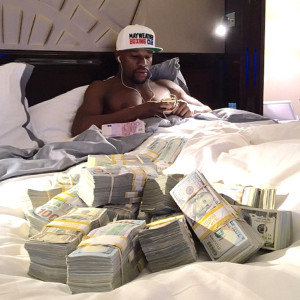 The man, the myth, the money

So what’s this got to do with money? Well, for one thing the fight was also the biggest payout to boxers in history – around $300 million by most estimates, thanks to merchandise, arena tickets, sponsorship, broadcast sales and pay-per-view subscription.

Mayweather walked away with a crazy $180 million of the purse, Manny about $120 million. Or put another way, Mayweather was dancing around the ring at a tidy $5 million per minute.

But just as interesting is the story behind the fighters themselves. Pacquiao is billed as the champion of the poor. He dragged himself out of the slums and is now giving back heavily to his community, grateful for the opportunities that life has given him. Meanwhile, Mayweather is all about the money, money, money. He’s brash, to the level of vulgar about it. He’s been done for domestic abuse. He even has Justin Bieber hanging off his coattails. It’s the classic good versus bad narrative that’s been great box office since the dawn of the sport.

Yes, it oversimplifies the reality but it does allow us all to think about how we align our values with our money. Pacquiao no doubt sees the massive payday as a way to address issues in the Philippines. Mayweather also had a challenging upbringing. But he seems intent on experiencing his money in a very different way and making damned sure that the world of old stays firmly in his past.

For Mayweather, money pretty much represents success to him. You and I might not connect with that, but you’ll find plenty of people out there just as conspicuous with their consumption and flashy with their spending – albeit with many fewer zeros in their bank balance to back it up. That’s the world we live in.

In a way it reflects pretty stark choices on how “success” is defined. Pacman versus Mayweather isn’t so much saint versus sinner. It’s a reflection of choices. And if Mayweather finds solace in counting his money and buying shiny things, then so be it. He’s the one that has to look in the mirror, like himself, like what he’s doing and like how he’s doing it.

He writes with an 18-carat gold pen and spends $4,000 a day on food, so say the tabloids. If that lifestyle is really what chimes with him (or anyone else), and he’s able to sustain it, then it’s his choice. That’s regardless of the fact that the rest of us may not quite get it and believe there are far more important things in life than an expensive pen.

Ultimately, we all have different relationships with money and how we think value is created and destroyed. It’s for us individually to work out our own money story and whether how we use it is working for or against what we value. As they say, the real measure of someone’s wealth is how much they’d be worth if they lost all their money.

And as actor Will Smith once said: “Money and success don’t change people; they merely amplify what is already there.”

Send us a message